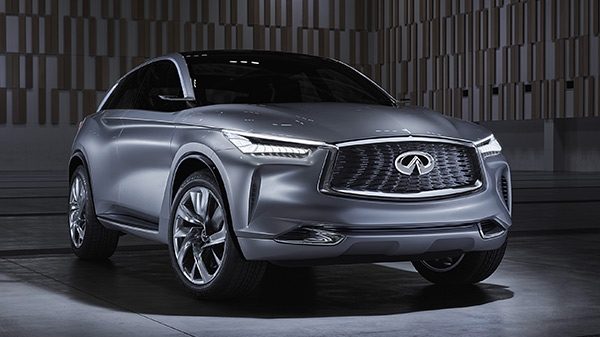 Infiniti is the marque covering luxurious and upper-echelon cars manufactured by the Japanese Nissan organisation.

By the 1980s, alongside several other major Japanese car manufacturers, Nissan had concluded that it needed a premium range of vehicles that would allow it to compete for the more affluent consumer segment in the United States.

This was driven at the time by the largely voluntary limit, agreed between the Japanese and U.S. governments, for the maximum numbers of Japanese cars that would be sold in the USA.  The consequential logic for Japanese manufacturers was inescapable in that if they were not permitted to sell economy models in large numbers then it would be more profitable for them to sell the same reduced number of vehicles but at premium price levels.

This drove the setting up of Infiniti as a high-end range of vehicles.

Although current Infiniti models are sold in Japan as well as overseas, they are not marketed under the Infiniti brand in Japan itself.

Over the decades since its launch in the 1980s, Infiniti has become a more globally based organisation and today it has its headquarters in Hong Kong.

In 2018, the company made a public commitment that it will produce exclusively electrically-powered and hybrid luxury vehicles from 2021 onwards.

Infiniti badged cars are highly sought after due to their engineering excellence and stylish comfort.

In some cases, there may be minor branding and availability differences between the vehicles as they are sold in the UK, continental Europe or the U.S. marketplaces.

Entry level prices for the Infiniti range start off in excess of £20,000.  Some of the latest models at the other end of the range have not yet had their current prices confirmed but figures in excess of £50,000 might be expected.

If you are looking for Infiniti vehicle financing, we at Forza Finance may be able to assist through our specialist panel of finance providers. We cover exclusive and upper-end vehicles, including those of the types offered by Infiniti. This is our area of expertise and the marketplace we operate in.

Qualifying conditions will, of course, apply.

If you’d like to take the first potential steps towards acquiring a prestigious Infiniti vehicle, why not contact us for a preliminary fact-finding discussion where we can look at your individual situation and outline some potential options that might be open to you.

That conversation will commit you to absolutely nothing and will also be treated by us as strictly confidential.